Influence at the Movies 3: The Courtroom 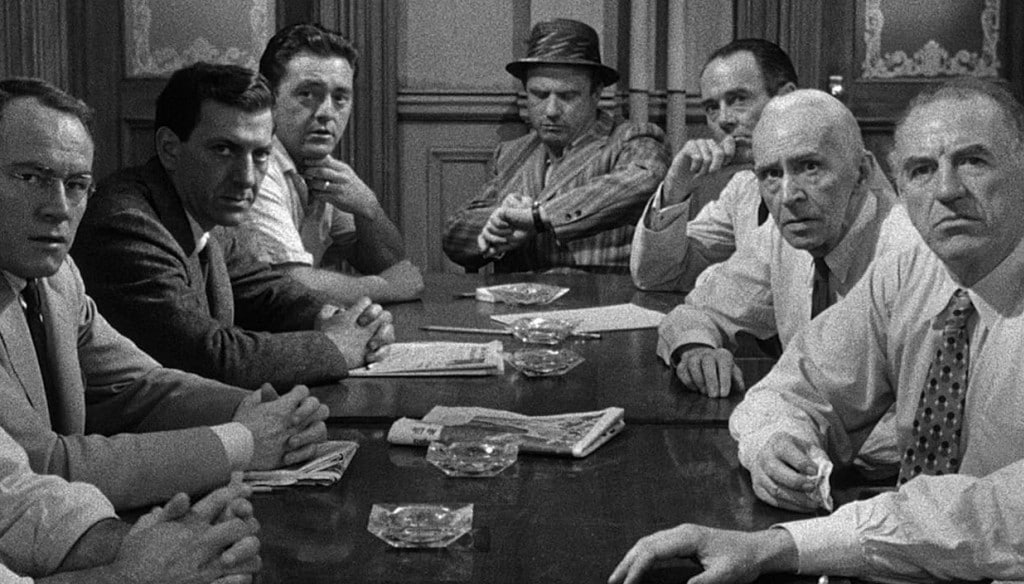 Arguably the greatest courtroom drama of all doesn’t take place in a courtroom, but in the juror’s room. Reginald Rose’s Twelve Angry Men was originally written as a teleplay for CBS and first broadcast in 1954. It follows the deliberations of a trial jury, as one dissenting juror seeks to convince the others that there is some reasonable doubt in what seems an open and shut murder case.

The big screen version, directed by Sidney Lumet, appeared in 1957. By this time, all the characters had been given more detail and depth. Joseph Sweeney and George Voskovec reprise their roles as jurors #9 and #11 respectively, while Henry Fonda’s Juror #8 is noticeably more confident than the original portrayal by Robert Cummings.

The film is like an influence manual, with every character employing a wide range of ‘push’ and ‘pull’ styles to put forward his point, to listen to arguments, to win over allies, to undermine enemies or simply to manage or avoid conflict. Just like any critical situation, each character brings his own agenda and influence style to the table. Each has his own priorities, his own blocks and emotional baggage, which at times spill over into prejudice and racism, aggression, snobbery or simple laziness. The latter is perhaps best illustrated by Jack Warden’s character, whose priority is not justice, but that a decision is made quickly so he can get to the ballgame on time.

The point is that if you’re interested in the ways we seek to influence each other, courtroom dramas can offer a petri dish of behaviour. There’s bombastic rhetoric, impassioned pleading, imploring, proposing and persuading, logic and reason, asserting to defendant, witness, judge and jury. There’s push and pull influence aimed upwards, downwards and sideways – from the judge, who wields all the positional power, to the defendant, who has none. And thanks to the rigid structure of court, every player gets their moment in the spotlight.

So, with all that in mind, we’ve picked some of our favourite examples of courtroom influence as portrayed on screen. And happily there’s some 12 Angry Men in there too.

Gary Cooper gives voice to Ayn Rand’s most unshakeable character, architect Howard Roark. The short version: ‘Yes I blew up the building. But it was mine.’

Excerpt: ‘Man cannot survive except through his mind. He comes on earth unarmed. His brain is his only weapon. But the mind is an attribute of the individual, there is no such thing as a collective brain. The man who thinks must think and act on his own. The reasoning mind cannot work under any form of compulsion. It cannot not be subordinated to the needs, opinions, or wishes of others. It is not an object of sacrifice.’

Dustin Hoffman discloses many faults as he fights for custody of his son.

Clip: Anatomy of a Murder

An apple metaphor is the clincher as James Stewart begs for a key overrule.

Excerpt: ‘How can the jury accurately estimate the testimony being given here unless they first know the reason behind this whole trial? Why Lieutenant Manion shot Barney Quill. Now the prosecution would like to separate the motive from the act. Well . . . well that’s . . . that’s like trying to take the core from an apple without breaking the skin. Well now the core of our defence, is that the defendant’s temporary insanity was triggered by this so-called “trouble with Quill”. And I beg the court . . . I . . . I beg the court . . . to let me cut into the apple.’

Maximilian Schell argues that the world, not Germany alone, must take responsibility for Hitler’s rise to power.

Clip: To Kill a Mockingbird

Gregory Peck ends his powerful closing statement with a direct order to the jury.

Excerpt: ‘ . . . If you hang these boys it will mean that in this land of ours the court of law could not help but bow down to public opinion . . .’

Excerpt: ‘So sometime in the twenty minutes that you were in the shower . . . your father was shot.’

Groucho begs the court to return the spy Chico to the bosom of his family.

Excerpt: ‘Gentlemen, Chicolini here may talk like an idiot, and look an idiot. But don’t let that fool you. He really is an idiot. I implore you: send him back to his father and brothers who are waiting for him with open arms in the penitentiary.’

Jesse Eisenberg gives the deposition more than they bargain for.

Excerpt: ‘I think if your clients want to sit on my shoulders and call themselves tall, they have the right to give it a try – but there’s no requirement that I enjoy sitting here listening to people lie. You have part of my attention – you have the minimum amount. The rest of my attention is back at the offices of Facebook, where my colleagues and I are doing things that no one in this room, including and especially your clients, are intellectually or creatively capable of doing. Did I adequately answer your condescending question?’

Amid bickering and intransigence, foreman Martin Balsam and advertising exec Robert Webber propose a plan for breaking the early deadlock.

Excerpt: ‘Now perhaps if the gentleman down there, who’s disagreeing with us . . . well perhaps you can tell us why you know. Let us know what you’re thinking and we might be able to show you where you’re mixed up.’